In the case of Bitcoin, they say “when in doubt, zoom out.”

The saying typically ripples across the crypto circles whenever Bitcoin trends downwards or sideways. It points to the cryptocurrency’s history of returning exponential gains on long-term timeframes even though its interim price moves flash extremely bearish signals.

Bitcoin is currently showing a similar negative bias. The cryptocurrency in March crashed by circa 64 percent from its year-to-date top of $10,522. It later recouped its losses entire and surged 50 percent atop the rebound. However, more gains are not coming in anymore.

The BTC/USD exchange rate stands stuck below a technical resistance range of $10,000-10,500. With traders unconvinced about a bullish progression, the short-term sentiment has flipped back to bearish. The result is repetitive attempts to break below $9,000.

As bitcoin consolidates inside the $9,000-10,000 area, an analyst has zoomed out its chart to spot a bullish structure. He now sees the cryptocurrency hitting $27,000 in an unforeseeable future.

The technical pattern looked genuine as it showed the bitcoin price marking a pause in the movement halfway through an uptrend. Meanwhile, the cryptocurrency pulled back more than twice from the pennant’s converging trendlines, showing traders’ inclination to buy near the lower trendline and sell around the upper one. 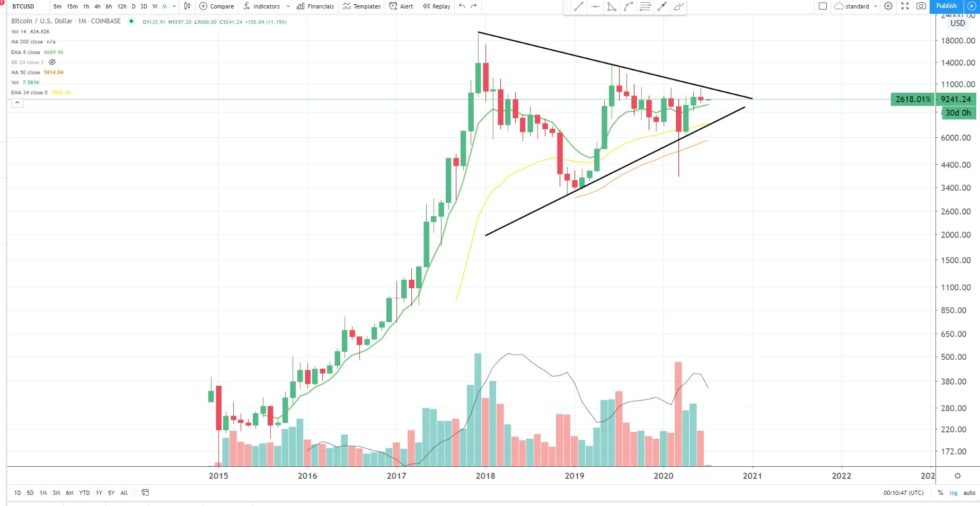 The pattern is nearing its maturity as Bitcoin heads towards the apex – the point where its two converging trendlines meet. Technically, it should result in a breakout to the upside – by as much as the height of the Triangle. But Big Cheds sees Bitcoin exploding towards $27,000.

Background of a Bitcoin Rally

The prediction follows Bitcoin’s growing demand amid a pandemic-hit global market. Paul Tudor Jones, a veteran hedge investor in May 2020 allocated 1-3 percent of his $22 billion-portfolio to BTC futures, noting that his decision would protect from the Federal Reserve’s inflationary tactics.

The US central bank pumped more than $2 trillion into the US economy, mostly by buying government bonds and comparably small amounts of corporate bonds. Meanwhile, the Donald Trump administration approved a $2 trillion CARES Act to help American individuals and businesses through the COVID-induced lockdowns.

Bitcoin bulls believe Fed’s action to leave a long-lasting inflationary impact on the US dollar. They project the cryptocurrency as an alternative due to its decentralized supply mechanism decorated with a 21 million hard cap.

The sentiment has made Bitcoin one of the best-performing assets this year, now sitting at more than 40 percent gains YTD.