While business and world leaders have struck new agreements on the energy transition at the COP26 climate summit in recent days, bitcoin (BTC-USD) has sustained a sky-high price above $61,000.

But concern over the energy-intensive process of bitcoin mining, which requires high-powered computers sometimes deployed on an industrial scale, has drawn scrutiny to the environmental impact of the world’s largest cryptocurrency.

In a new interview, Tom Steyer — a hedge fund billionaire and environmental advocate — described bitcoin as a “huge user of electricity,” contending the cryptocurrency will remain an environmental threat as long as the energy grid depends on fossil fuels.

“Someone came up to me with a proposal — this is probably four months ago, so not that long ago — [asking] did I want to invest in a bitcoin mining operation next to a coal plant?” he says.

“The idea being you don’t have to transport the coal — it’s much cheaper [and] we’ll be able to create bitcoin at a big spread to the current price. This is a great money making opportunity. That is a disaster. That is a straight up disaster,” he says.

Bitcoin mining, the process that records transactions and brings new bitcoins into circulation, demands miners solve complex math problems using advanced computation. In exchange, they receive a portion of bitcoin as a reward, making the task potentially lucrative, especially as the price of bitcoin continues to climb.

An analysis conducted by Cambridge University, released in February, found bitcoin mining consumes 121.36 terawatt hours a year of energy, which amounts to more than that consumed by Argentina, or more than the consumption of Google, Apple, Facebook, and Microsoft combined. 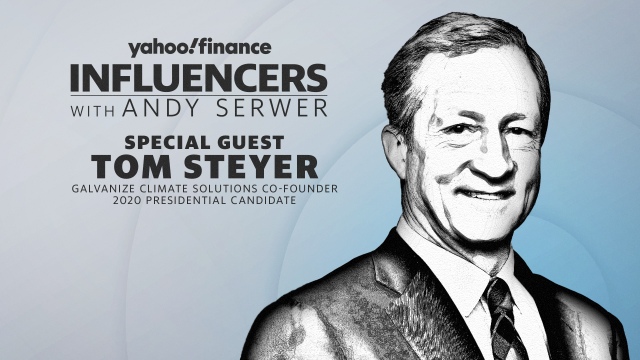 In this episode of Influencers, Andy is joined by Galvanize Climate Solutions Co-Chair, Tom Steyer as they discuss sustainable investing and why the private sector must ‘step-up’ to solve climate change.

The global landscape of bitcoin mining shifted dramatically in May, when China banned the practice. Once the world’s top home for bitcoin miners, China ceded that role to the U.S., which as of last month hosted over 40% of bitcoin mining.

In the U.S., bitcoin remains largely unregulated. But top officials in the Biden administration have moved toward new rules for cryptocurrrency in recent months.

Treasury Secretary Janet Yellen has urged speedy adoption of rules for stablecoins, a form of cryptocurrency that pegs its value to a commodity or currency, like the U.S. dollar. Plus, SEC Chair Gary Gensler has described the crypto market as the “wild wild West” and indicated a desire to regulate it.

It remains unclear whether such regulations would affect cryptocurrency’s environmental impact.

“Bitcoin is a huge user of electricity,” Steyer says. “So to the extent that that electricity is derived from fossil fuels, and is emitting greenhouse gases and other dangerous toxins, then yeah, it’s a problem.”

Steyer rose to prominence as the founder and senior managing member of hedge fund Farallon Capital Management, which he departed in 2012. Since then, he launched the voter engagement organization NextGen America and became a leading advocate on environmental issues.

Speaking to Yahoo Finance, Steyer noted that the issue of bitcoin’s environmental impact ultimately comes down to the transition toward the sustainable generation of electricity.

“The real question is when you think about it: Clean up the electricity generation, electrify everything. Be smart about your energy use. That’s kind of the overall take on how we reduce emissions,” he says.